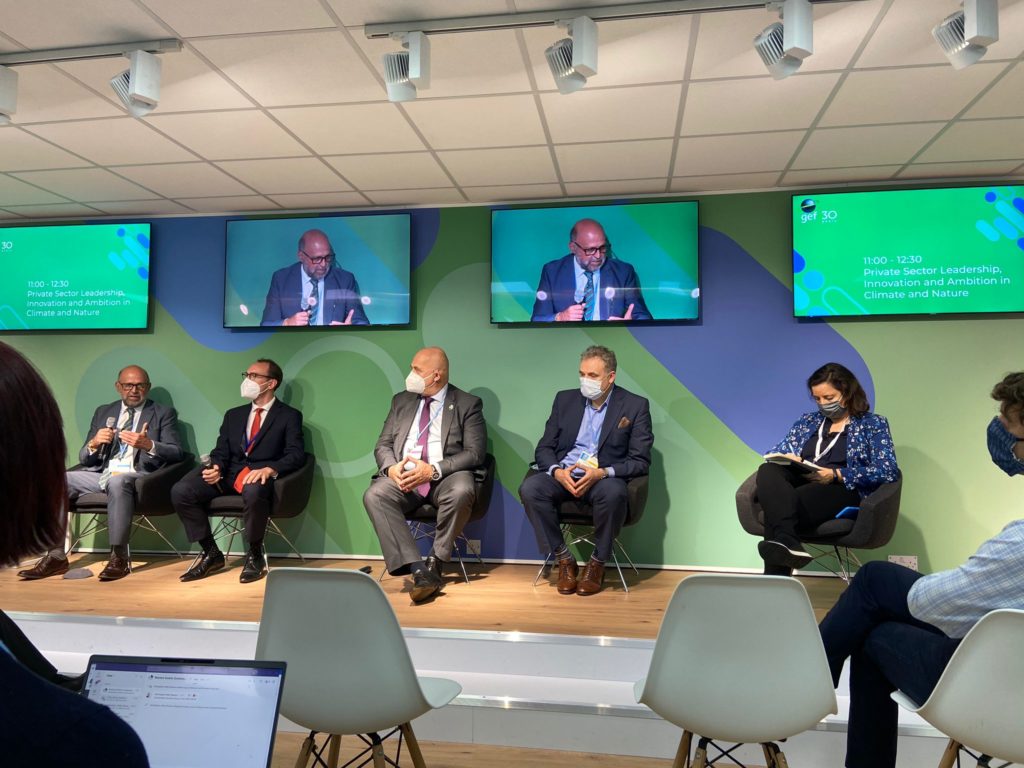 Climate scientists around the world have laid out the stark reality of the situation we find ourselves in. We understand that the current trajectory we are on will miss the 1.5C degree of warming target as outlined in the Paris Agreement, and by some way.

At COP 25 in Copenhagen in 2009, developed countries agreed to “a goal of mobilising jointly USD 100 billion dollars a year by 2020 to address the needs of developing countries.” This commitment was introduced to assist the most vulnerable nations who suffer the most for climate change despite being responsible for a fraction of global GHG emissions.

Yet, data from the Organisation for Economic Co-operation and Development (OECD) shows the target is consistently missed. While the figure has consistently increased over the last five years, it remains over $20 billion short of the goal – a goal that was supposed to be achieved by 2020. In the run up to COP 26, discussions suggested that the target may not be met until 2023. This is concerning, given that the $100 billion target will serve as a minimum for climate finance by 2025, with formal deliberations on a new finance goal due to take place at COP 26.

Appointing responsibility and apportioning a ‘fair share’ of the contributions to developed countries is a challenging task. The accord signed in Copenhagen relies on pledging rather than providing clear cut determinations for individual country responsibility. According to a paper by the Overseas Development Institute, only 3 countries (Sweden, Germany and Norway) of the 23 responsible for providing international climate finance. What’s more, Portugal, New Zealand, Greece, Canada, Australia and the US all paid less than 20% of their fair share. The US, especially, in absolute terms, paid less than the UK, France, Germany and Japan despite having an economy greater than all of them combined.

The $100 billion target, however, is not the only finance challenge. Globally, the estimated costs of addressing climate change vary but the IEA show that approximately USD $4 trillion is required annually to avoid the worst impacts. According to the UN, every dollar of green investment could yield four dollars in benefits, from infrastructure enhancement, energy efficiency, green jobs and more. A 2018 report by the New Climate Economy provided a conservative estimate of direct economic gain of US $26 trillion by 2030 if bold climate action was taken compared to business-as-usual.

Outcomes and news from COP26

How do you spend USD $130 trillion? This was the hot question on Wednesday at COP 26 – Finance Day. As world leaders left the conference on the back of broad global commitments, negotiators and those imperative to the financing of successfully achieving those goals took centre stage

UN Special Envoy on Climate Action and Finance, Mark Carney, announced the Glasgow Finance Alliance on Net Zero (Gfanz), a coalition of private sector companies, 450 and counting, responsible for over $130 trillion in assets to deploy to tackle the climate crisis and reach net zero targets by 2050. “Right here, right now is where we draw the line”, Carney said as he outlined the main areas of Gfanz, including a 5-year decarbonisation plan, annual mandatory reporting on all assets aligned with Race to Zero criteria and science-based targets with interim targets too. A framework to wind down the use of stranded assets is included and portfolio alignment alongside the rest of Gfanz activity will be closely scrutinised by an advisory panel of independent climate experts with significant financial experience, including the Climate Policy Initiative, Carbon Tracker Initiative, WWF, Transition Pathway Initiative and many more. This eye-watering target meets, and goes beyond, the annual $4 trillion estimated requirement – “the money is here; the world wants to use it.”

Nonetheless, there was a prevailing sense of healthy scepticism regarding the Gfanz announcement. Several people at the conference pointed to the fact that governments have not been able to mobilise $100 billion annually so the goal of over forty times that for the private sector seems out of reach regardless of their vast resources. One person described the target as “an accountant’s figure”. Others noted that a large part of the progress will rely on political will, with the example given that over $10 trillion has been spent on combatting COVID-19 in under two years – similar financial flows are required for climate.

There is no doubt that climate solutions and technological innovation are viewed by the private sector as enormous financial opportunities. Solving challenges around energy access, efficiency and storage, biodiversity, “the greatest economic opportunity of our time” stated US Secretary of the Treasury Janet Yellen in the plenary hall. Her positive speech did, however, raise the question of whether enough investment opportunities will arise to absorb these enormous financial flows if they were to materialise. 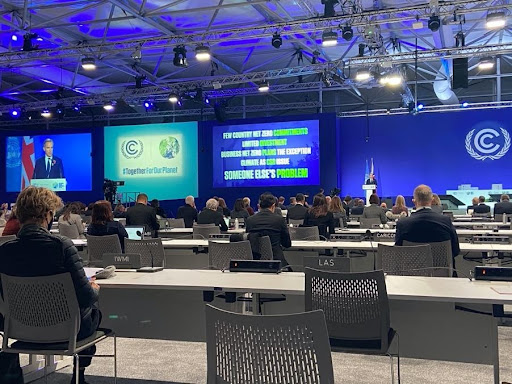 Mark Carney announcing Gfanz in the main plenary at COP26

In a bid as host to show leadership, Chancellor Rishi Sunak announced that the UK will be the first ever net zero aligned financial system – a bold pledge, especially with London as the financial capital of the world. Companies must publish a clear plan to carbonise to net zero and reporting of climate-related information is mandatory. Sunak noted that annual financial accounting is mandatory and the same should occur for climate data. An independent task force will analyse the progress.

COP President Alok Sharma pointed to the responsibility of developed nations taking the lead on public finance, noting that even the $100 billion annual goal will not be enough in coming years. A Just Transition Plan for South Africa was unveiled at COP, with the UK, US, France, Germany and the EU committing $8.5 billion to ensuring an equitable transition and with the overarching goal of eliminating the nation’s coal mines. 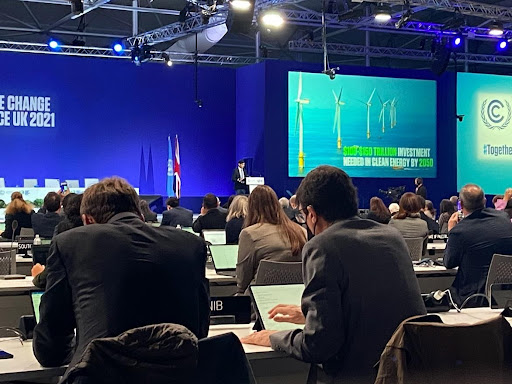 Rishi Sunak announcing the UK’s ambition for the financial system

“I call on all countries to find new solutions to adaptation financing”, Sharma stated. This is an especially important point as the UN published its Adaptation Gap Report this week. The report highlighted our current trajectory of 2.7C degrees of warming will cause catastrophic extreme weather events that could cost up to $500 billion a year by 2050 – more than ten times that $46 billion spent currently.

At the UK pavilion, adaptation financing was the topic of discussion. The Centre for Disaster Protection hosted a talk on closing the protection gap in disaster financing. Pearnel Charles, Minister of Housing, Urban Renewable, Environment and Climate Change from Jamaica, Ekhousuehi Lyahen of the Insurance Development Forum, and Christina Bennet of Start Network pointed to the vital use of early warning systems, technology and enhanced forecasting and planning to build resilience prior to extreme weather events. A little over half of all disasters are predictable, yet we continue to wait to respond rather than getting ahead of them. Innovations in risk financing such as instruments that disburse funding before extreme weather events will have significant positive impacts on local communities and reshape how we think about risk. The panel noted that we must also differentiate between types of weather events. Sudden, violent events like cyclones and hurricanes should not overshadow the risks posed by slow onset challenges such as drought and desertification. Public-private partnerships are critical to provide such innovative financial instruments at the required scale. 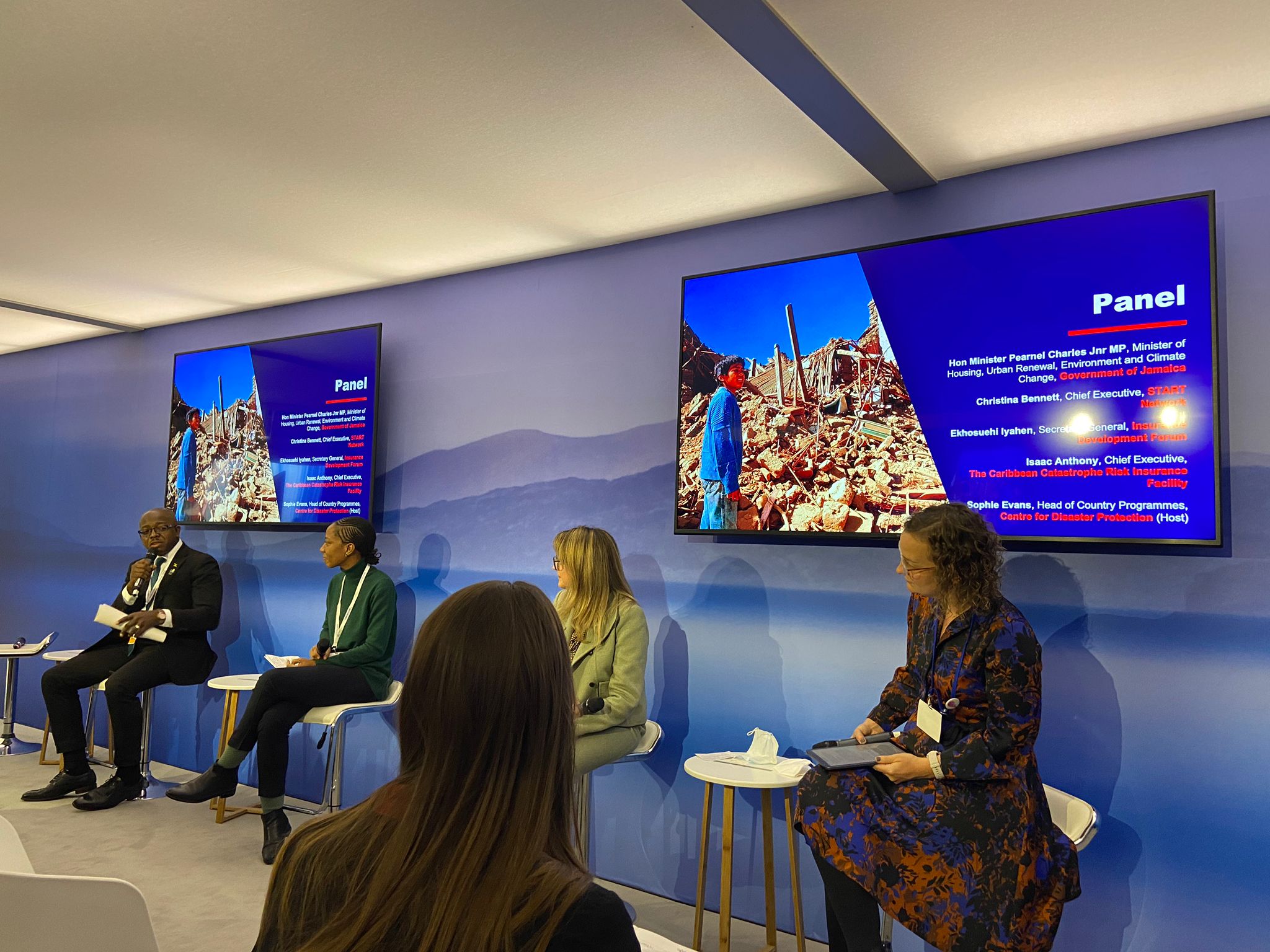 In Glasgow, E Co. spoke with the Executive Director of the Climate Markets and Investment Association (CMIA), Margaret-Ann Splawn, to better understand how the world can meet climate goals through finance.

1. The $100 billion annual goal for developing countries has fallen short in recent years, how do you think the parties can achieve this in the future?

Margaret Ann: Through blended capital solutions to help de-risk private sector investment and attract investments that would otherwise not invest without a buffer. It is becoming increasingly clear that governments do not have enough money alone to finance the 100 billion and overstretching them could cause fiscal challenges. Equally, given their resources, the private sector and its investors remain incredibly underrepresented.

2. What can the private sector do to enhance their impact?

Margaret Ann: The private sector can be pragmatic in telling governments what they need, in terms of the prevailing conditions that would make investment more attractive to them. This includes policy that is long, loud and lasting. The goal of which is to create a pathway in which to access the market and invest in a growing area of opportunity while simultaneously tackling enormous global challenges. While there is no such thing as a risk-free investment, unproven technologies in challenging countries remain especially high-risk. Therefore, mainstreaming mechanisms that limit this risk will help the private sector crowd-in investment. For example, certain private sector projects, such as some in the GCF, provide first-loss guarantee. Moreover, with backing from large funds comes enhanced credibility that may make investors more comfortable to part with their money.

3. What opportunities for finance (including blended finance) do you see in the near future?

Margaret Ann: Clearer plans and pathways need to be drawn – what does the future of climate finance look like and how can it be accessed? The is currently an enormous mismatch – trillions of dollars are flowing into ESG, but this is not grounded in science. Some of these financial flows could be redirected towards science-based initiatives, therefore avoiding missing an opportunity to crowd in private sector finance. Aligning portfolios with the Paris Agreement are essential but the relevant policy structure must be in place for the private sector to be attracted. Currently, many companies are making voluntary climate commitments and disclosures but this is very different to having to report to a regulator.

Equally, why the private sector is not currently focused on the implementation of Nationally Determined Contributions (NDC), NDC investment plans will be needed to fund the targets outlined in them. There is significant opportunity for public-private partnerships in this area.

The more discussions we have, the clearer it becomes to realise where the gaps exist and highlight the ongoing challenges. This makes it far easier to then allocate the necessary resources to overcome them.

To read our article from the World Leaders Summit at COP26, click here