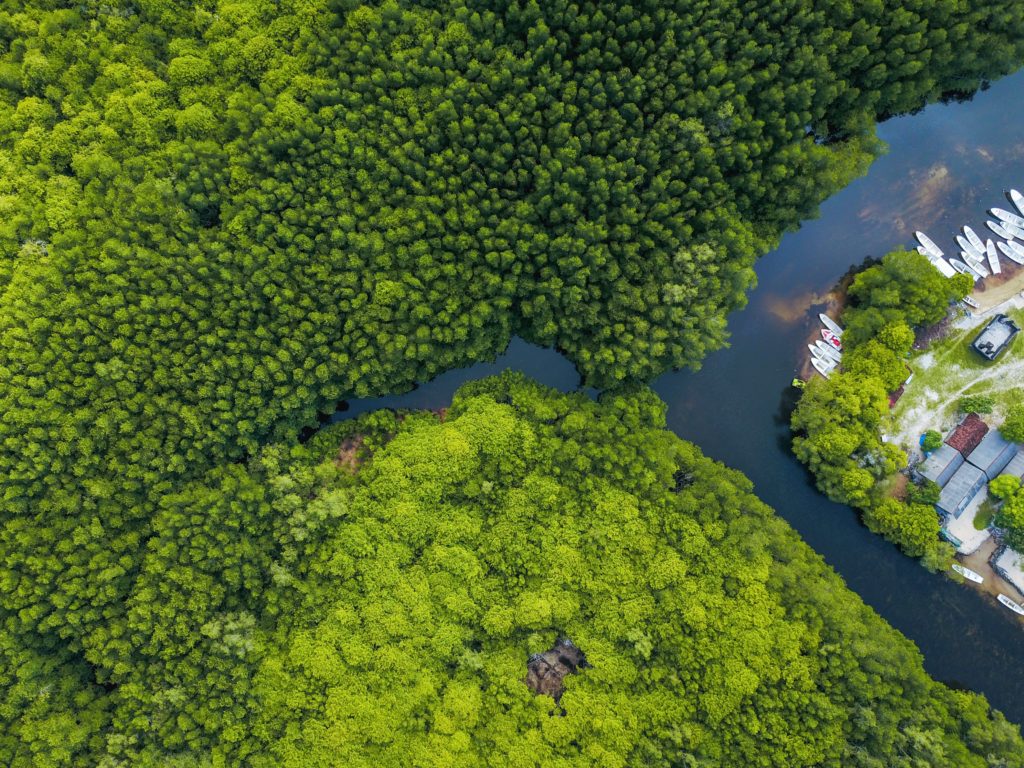 Over the past 6 months, as part our training and capacity-building division – E Co. institute, we’ve has been working with the Global Green Growth Institute (GGGI) and the Fiscal Policy Agency, Ministry of Finance Republic of Indonesia as the National Designated Authority (NDA) of the Green Climate Fund (GCF) Indonesia to build the capacity of shortlisted project proponents from the inaugural NDA Call for Project Concept Notes in developing concept notes for the Green Climate Fund (GCF). As part of the assignment, representatives from civil society organisations, local government and the private sector have received in person training and remote coaching support.

What does the GCF mean by ‘paradigm shift’, ‘climate rationale’ or, what are they looking for when then say projects must include co-financing? How does one ensure that a project is gender mainstreamed when designing a GCF project?

Insight into the assignment

The training programme is divided into two main parts:

We delivered two trainings in Indonesia in October of 2019 and January 2020. Each training covered a number of topics, including, the GCF investment criteria; problem and solution trees; the climate rationale; theory of change; logframes; project finance and budgets; and co-financing requirements. My colleague, Alex Milano wrote about the October training here.

After the in-person training in January, we began in the remote coaching support phase. This includes written feedback on concept notes, a webinar series and access to an online course on gender. By the end of the assignment, we will have provided three rounds of feedback on 25 concept notes. The webinar series prioritised topics based on feedback from the participants and GGGI, and our observations from the concept note reviews. These topics included co-financing, environmental and social standards, paradigm shift, climate rationale. The gender course consisted of two modules (Module 1: Gender in GCF concept notes and Module 2: Gender mainstreaming) and was made available to participants.

The final webinar of the remote coaching support covered the topics of climate rationale and paradigm shift for both mitigation and adaptation projects. These topics often present a challenge to project developers and generate a great deal of discussion in our training sessions.

Grasping the concept of paradigm shift prior to executing the details of your project design can be very beneficial when planning your project. It is one of the 6 investment criteria of the GCF.

The GCF definition is: “the degree to which the proposed activity can catalyse impact beyond a one-off investment and results in medium to long term change.” The GCF wants to see projects that are designed in a way that the project won’t just be a one-off investment, but rather will catalyse broader sectoral change.

So, what does that mean when writing a concept note? Taking an example from the webinar, a project on developing geothermal energy (such as the GCF project currently being implemented in Indonesia) should build local capacity and train people within the country to be able operate and maintain the technology throughout the lifetime of the technology – as opposed to importing expertise.

There are four key pillars that GCF uses to judge to what extent a project is ‘paradigm shifting (see figure below – 1, 2, 3, 4). 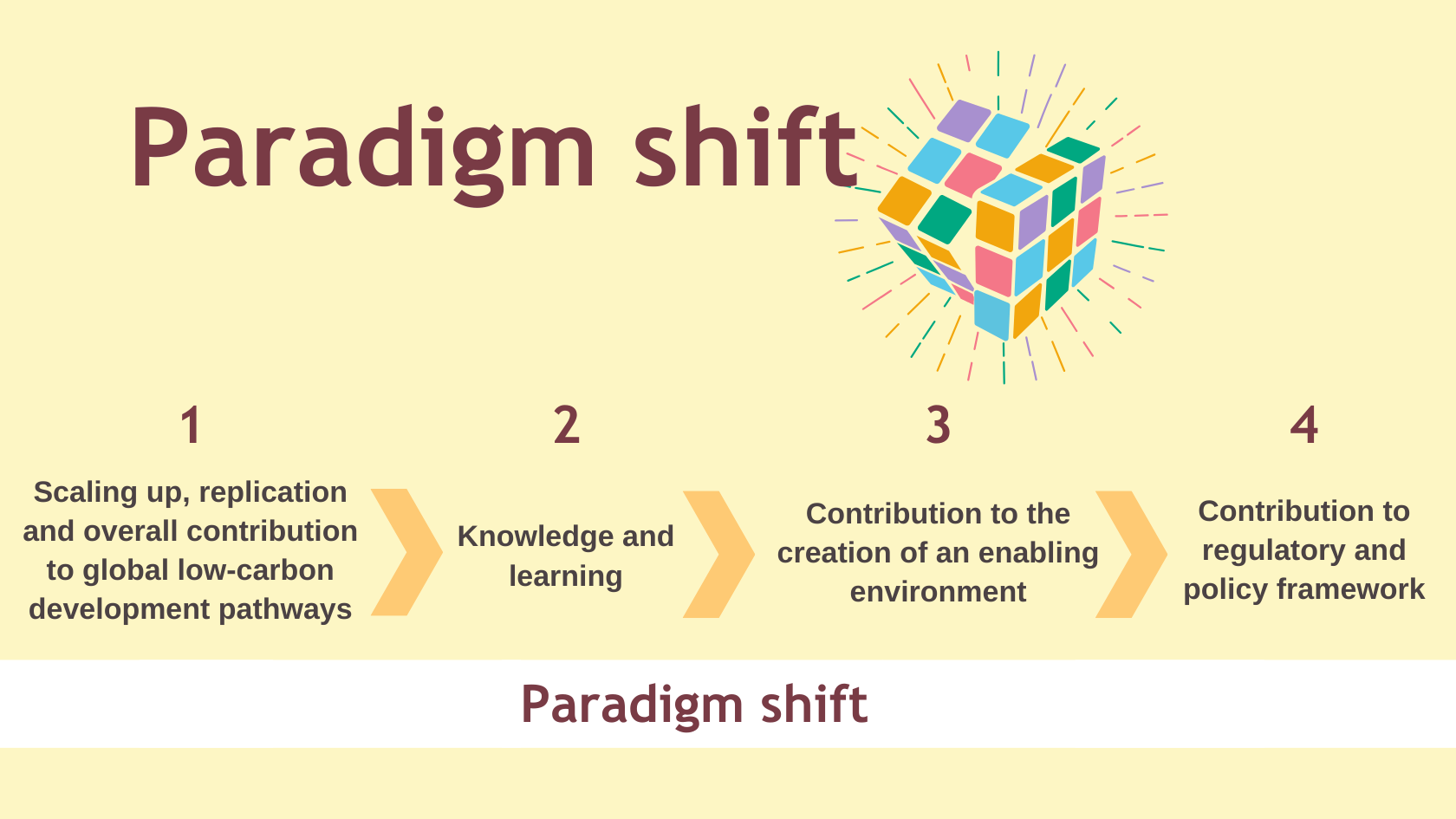 Pierre Telep, from the GCF, joined as a guest speaker at our final webinar. Pierre is the Renewable Energy Sector Lead at the GCF. We’ve worked with Pierre in the GCF Renewable Energy Sector Guidance. He spoke on the paradigm shift, mentioning that it is indeed a “very complex” term. Pierre explained how, along with the rest of the 6 investment criteria (see image above), the paradigm shift contributes to the assessment of funding proposals with a ranking  between ‘high, medium, or low’.

He then explained the key elements of paradigm shift that defines ‘impact’ (see four key pillar image above). He shed light on issues relating to challenges differentiating between (3) and (4), where (3) focuses on ensuring the project activities should create a strong market environment and create opportunities for the private sector to invest in e.g. mitigation technologies. (4) focuses on ensuring that the project will contribute to changes in policies and regulation so that the country can continue moving forward to address climate change.

Pierre emphasised that funding proposals assessments are driven by the reality where the GCF proceeds will be passed in an accountable manner,  ensuring that the funds are used to create visible and reportable impact. This means that investments in projects must result in transformational change and will have a significant impact in terms of either reducing emissions or building climate resilience that will extend far beyond the lifetime of the project.

The paradigm shift investment criteria is to ensure that the GCF does not have a transactional culture to its investments, rather a culture that systematically seeks transformation. This is why paradigm shift should be mainstreamed throughout a project concept.

How can we help you?

At E Co. we design projects for climate funds such as the GCF. Our training division, E Co. institute, offers an opportunity for us to accelerate climate action by ensuring that project developers around the world have the right tools and know-how to be able to secure funding for their project. In turn, they are able make an impact in their countries and local communities.

However, there are barriers to accessing climate finance. Understanding and designing a climate change project that fulfils GCFs criteria, addresses and responds to GCFs concepts and theories, is not an easy feat.

These barriers are particularly challenging for local actors to overcome. To date, the majority of the organisations that access GCF funds are large international institutions, such as international financial institutions or United Nations organisations. Direct access entities, or national-level entities (such as national NGOs) are unfortunately being left behind. Many of these entities lack the funding and capacity they need to develop a concept note or full funding proposal for the GCF. Bringing direct access entities to the table means greater country ownership; a key principle that the GCF strives for.

At E Co., while we have provided GCF trainings for a number of international organisations such as UN agencies and the World Bank, we strive to develop capacity at the local level—this is our paradigm shift. It is the only way to make long lasting impactful change towards low carbon and climate resilient pathways and accelerate action.