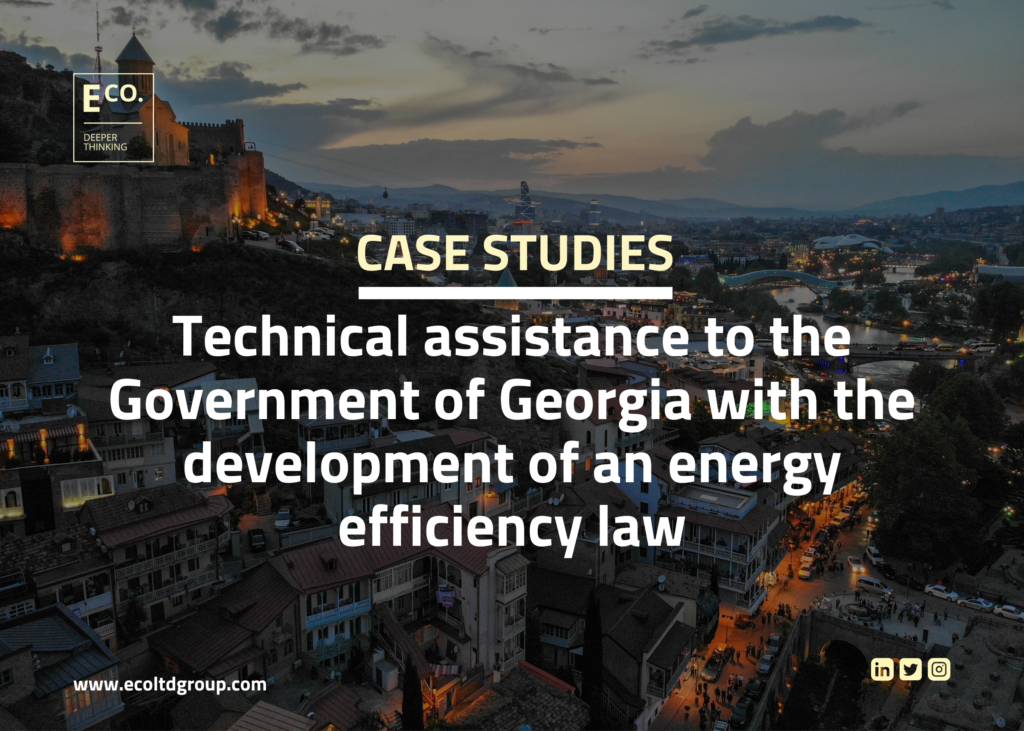 Since 2015, E Co. with its local partners including the Energy Efficiency Centre of Georgia (EECG), Sustainable Development and Policy (SDAP), and World Experience for Georgia (WEG) has provided technical assistance to the government of Georgia in developing action plans and new legislation for sustainable energy – including energy efficiency and renewable energy. In the last few months, the Government has achieved a number of milestones in its journey towards having a legislative framework in place for sustainable energy. In particular, E Co. played a big role working with EBRD to develop the draft Law on Energy Efficiency – which has now officially been adopted. At the same time, Georgia has adopted a Law on Energy Performance of Buildings – which E Co. has also been involved with related to its development of secondary legislation.

“The two new pieces of legislation – the Law on Energy Efficiency and the Law on Energy Performance of Buildings – are important milestones for Georgia in meeting its requirements under the Deep and Comprehensive Free Trade Agreement (DCFTA), as well as its membership of the Energy Community, an international agreement that brings the European Union and its neighbours together to create a pan-European energy market.

These laws will enable Georgia to realise energy savings of 14 per cent by 2025, thereby helping the country to meet its international obligations in combating climate change, increase its energy security and strengthen its energy links with the EU. In addition, these laws will help improve the energy performance standards for new constructions and building retrofits in line with EU standards.” – EBRD welcomes adoption of key energy efficiency laws in Georgia, EBRD

The ultimate objective of this assignment was to establish the legal and regulatory framework which will stimulate investment into energy efficiency in Georgia. Here are some of the things we did:

▪ Drafting an EE Law which has been approved provisionally by the Georgian Government, fully compliant the Energy Efficiency Directive – with additional attributes such as:

As part of the assignment, E Co. either organized or participated in numerous events to raise awareness and build capacity amongst stakeholders. In the end, the assignment organised six events and contributed to another two events geared specifically towards parliamentarians, and one geared towards industry representatives.

▪ Engaging stakeholders through an effective consultation process, including:

As part of our wider work supporting the Government of Georgia, our team has also been involved in developing its first NEEAP, adopted at the end of 2019, developing its first the REAP, which was also adopted in a similar time scale, regulations on energy performance in buildings, and the current development of the National Integrated Energy and Climate Plan.

Learn more about what we do here