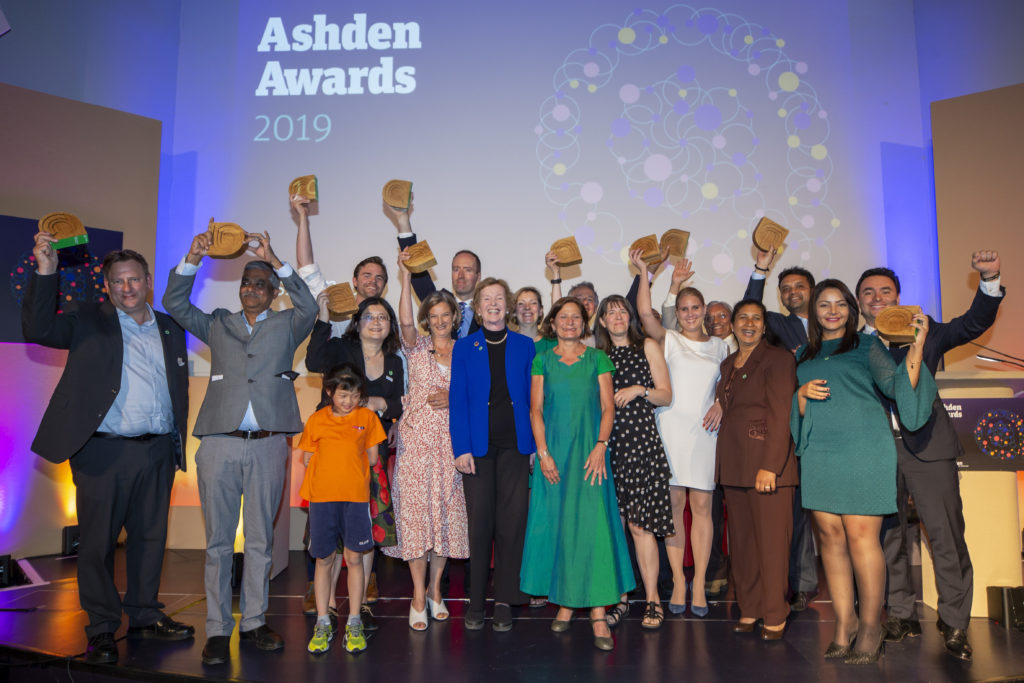 Ella Jollands, interning at E Co. this summer,  describes what she learnt at this year’s Ashden Awards at the Royal Geographical Society in London.

In a world where the threat of climate change looms, the Ashden Awards offer a welcome respite. It is a revitalising reminder of human endeavour; a reminder that despite causing climate change, we are also responsible for its mitigation. The ten winners represent ten teams from around the world who have not merely understood this challenge, but embraced it. These projects are not narrow, merely focusing on the technological players, instead they promote empowerment and inclusive solutions with a strong focus on women, the communities struggling with rapid urbanisation as well as those left behind. They show that the climate change emergency is not just an environmentalist fight, but an intersectional one where the lives of vulnerable people from all around the world must be helped.

The first award went to Highview Power. Their revolutionary CRYObattery technology uses liquid air, making batteries durable, cheap and easy to install. This allows excess solar and wind energy to be stored for later use, thus allowing for more renewable energy to be integrated onto the grid.

Next was EQuota Energy, where Charlotte Wang took to the stage to talk about their building management system. The Chinese firm has integrated AI and ‘big data’ to allow building owners to make decisions that reduce their emissions and spending from their smartphones, without the need for any intrusive or costly installation work.

Then came my personal favourite, NEF and Energiespong’s high impact retrofits. Taking the simple concept that much of UK social housing is uniform, they have been able to mass produce whole walls off-site that are then attached the houses. Then, the solar panelled roofs are installed. This ingenious way of retrofitting houses comes with a huge social benefit–the beautiful exteriors give worn council housing a face lift, making people proud of their new homes.

For the second UK-based award, The London Borough of Waltham Forest councillor Clyde Loakes took the stage with a bold “wowza” and discussed the political push required to reinvigorate his North East London borough through cycle paths and road closures. The benefits have ranged from allowing local businesses to thrive, to increasing the average life expectancy of a child born in the borough by six weeks.

Next, the charming rickshaw revolution, designed by SMV Green Solutions, is the modern evolution of the battery powered rickshaw. It combats India’s devastating air pollution problem through a female grassroots movement, which empowers women to earn income for their families through running a sustainable transport business.

Resham Sutra’s silk reeling machines was another project that focused substantially on gender empowerment. Inspired after seeing the high-risk damage caused by thigh-reeling, Sutra was determined to come up with a solution in the form of solar powered reeling machines. These machines radically improve work conditions for women. It is also a great opportunity for them to earn a livelihood in a bolstered village economy so that they are not forced into the waves of mass urbanisation.

Another award recipient from India, the Karuna Trust won the award for sustainable energy and health. They created energy-efficient buildings powered by solar panels, which allowed them to provide their services from the heart of their local communities and without worrying about power cuts and shortages interfering with their life-saving work. Then, Sistema.bio cleaned up the clean affordable cooking award, with their affordable bio gas system which helps farmers use their animal waste as a source of clean and reliable cooking fuel, the main by-product of it being a fertiliser that can be used on crops.

Then, Sabera Khan with her team of experts then took the stage with their REEEP project Beyond the Grid Fund. She realised that much of rural Zambia could not be connected to clean energy and developed the fund to make it less risky for businesses to enter the country’s off-grid energy market and ensures that they are only being sold high quality products.

Last was the green corridor initiative in Medellín. In 1991, it was the most violent city in the world, but a natural cooling initiative has been part of changing that, as they developed 30 green corridors in the most dangerous parts of the city. Not only has this reduced crime, it has reinvigorated a sense of community through the maintenance of these corridors.

Mary Robinson and the Future of Ashden

After all the awards had been given, Mary Robinson, former President of Ireland, UN High Commissioner for Human Rights from 1997-2002, and now Adjunct Professor for Climate Justice in Trinity College Dublin, took to the stage. Casting away her notes, she spoke passionately about climate change as an issue that unites us, affecting all of our lives. She referred to her departed friends firstly, Wangari Maathai, using her moving quote, that:

“In the course of history, there comes a time when humanity is called to shift to a new level of consciousness, to reach a higher moral ground. A time when we have to shed our fear and give hope to each other. That time is now.”

She then quoted Nelson Mandela, simply stating: “It always seems impossible until it is done.” She also acknowledged the harsh realities: that fossil fuels are big money in a way that renewable energy cannot compete with, but that environmental catastrophe cannot be avoided without collaboration. She concluded that we need organisations to change, not because it makes financial sense but because it is “the right thing to do.”

Yet, her self-confessed “stubborn optimism” was reassuring, her nod to the new generation of climate activists inspiring, and her point that climate change is a man-made problem that needs a feminist solution was embraced by Ashden, a hub of strong female leadership, where Harriet Lamb is taking over from Sarah Butler-Sloss as CEO. – Ella.

“The active workshop truly allowed for the possibility to progress climate change projects. 8 Ashden Winners were introduced to 7 Supporters from the private and NGO sectors. Winners presented their critical project needs in seeking to scale climate solutions, to Supporters who, in turn, shared the expertise they might offer in a range of areas including: project design and formulation, legal advice, document support, capital investment, sales and marketing, network facilitation and project management. For E Co. it was a great opportunity to be part of a group accelerating climate change and related co-benefit pilot projects with potential.”