Environmental policy update: Where does the office recycling go? E Co. spends a day at the dump to find out 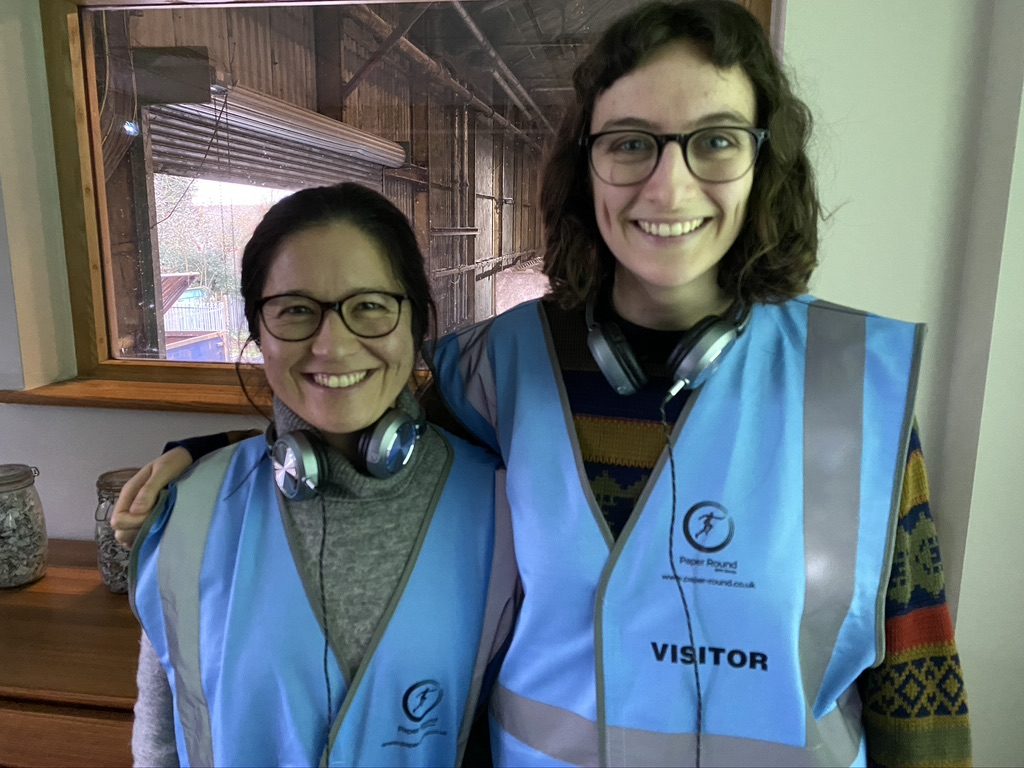 E Co. Principal consultant Dr Jasmine Hyman and Analyst Sadie DeCoste traveled to Paper Round Materials Recovery Facility (MRF) in Essex to learn about the ins and outs of London recycling. We share with you what we learned at the MRF, and what those findings mean for E Co’s increasingly ambitious environmental policy and for the recycling enthusiasts among you. How does a MRF work, and how does that inform the Dos and Don’ts of recycling office waste?

Pollution is nothing but the resources we are not harvesting. – R Buckminster Fuller

At our office on Gray’s Inn Road, there was mounting curiosity and a fair degree of skepticism that recycling was really happening. We do have separate bins for trash and for mixed recyclables, but those bins are used by multiple offices at The Boutique Workplace (TBW) and even just a passing peek shows a lot of contamination and confusion in the green bin.

The E Co. environmental policy has specific goals around waste reduction and re-use, so we were able to justify a work-day field trip to the recycling service provider for the building—Paper Round’s Materials Recovery Facility (MRF), in Essex. Where do our papers, our lunch packaging and material from our other workplace tenants go? What happens when people put the wrong thing in the wrong bin? How much of our waste is actually recycled?

Corporate blog posts on waste management aren’t really the stuff of thrillers, so I’ll lead with a spoiler: our findings were far more heartening and inspiring than expected –  97% of the waste that makes it to Paper Round is credibly harvested for re-use! However, that happy figure only counts for the material that makes it to Paper Round: a mere 32% of our building’s waste gets sent to be recycled, and the rest goes to the landfill. TBW laid out their plan for raising recycling engagement and reducing the office footprint overall. Building Manager Gisella Cicero told us that TFW uses “100% renewable electricity across 60% of our [486] sites,” and that E Co’s office is 100% powered by renewables. We also spoke with TBW’s newly hired sustainability manager, Jodie Lynch, who agreed that improved understanding of the waste cycle was needed, and helped us set up the field visit to Paper Round. 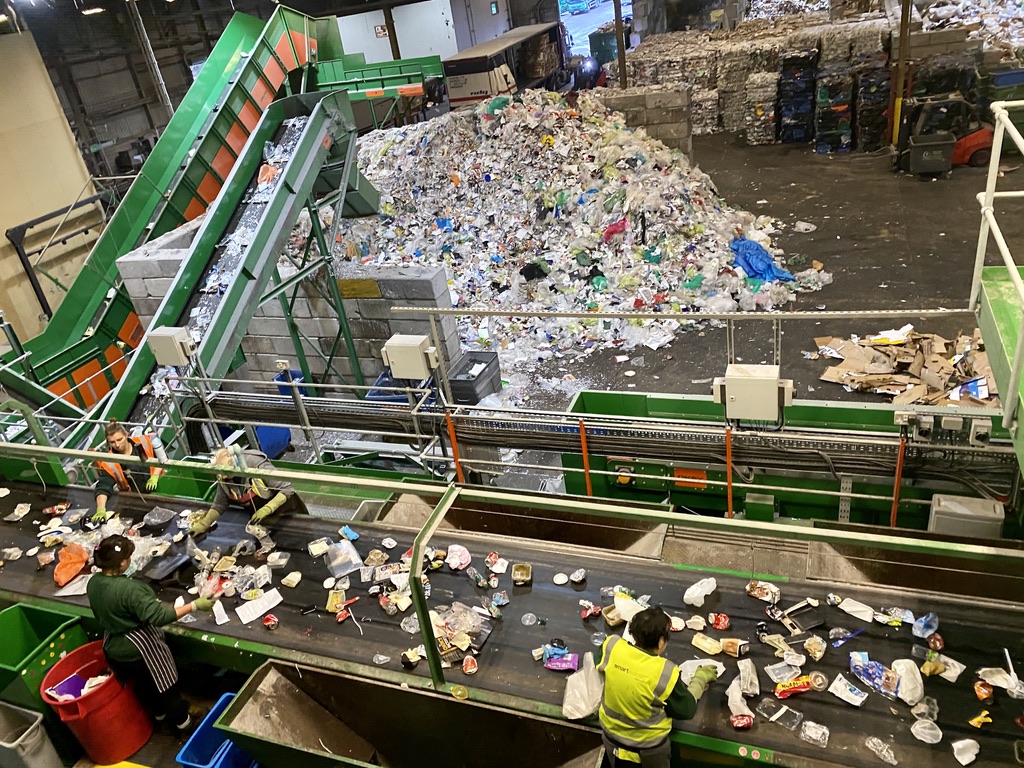 Two hours from King’s Cross on public transport, we arrived at Paper Round’s MRF in Purfleet Industrial Park, just next to the Rainham Marsh Reserve. On our tour, we learned that Paper Round was originally established by Friends of the Earth in order to demonstrate that mixed recycling can also be financially viable, and now Paper Round serves as a fully commercial operation. The MRF recently went through a £2.5 million makeover, allowing it to increase its capacity by 300%. It can process eight tonnes of dry mixed recycling each hour, for a total of 30,000 tonnes of materials each year. According to Alison Roe, Director of Paper Round, the equipment upgrade has enabled higher recovery rates, and they are estimated to be the largest Materials Recycling Facility in London for commercial clients.

The MRF collects mixed recycling from several businesses across London and sorts it into different types of recyclates: card-paper, mixed paper, plastics, glass, metal/tin, veggie ware, organic compost. Once sorted into bales, the recyclates are further processed. For example, plastics go from the MRF to the PRF (Plastics Recycling Facility) where they are further segregated by type. Alison explained that the MRF’s focus on commercial waste led to higher recycling outcomes, “Having a dedicated ‘clean’ MRF, which only collects from commercial sites, means that recycling rates are higher due to less contaminated materials being received from businesses than from households. This, combined with our investment in the latest equipment means that we can process material quicker and more accurately.”

In this way we learned that while we had been suspicious about our office waste’s final destiny (some E Co. employees even take their paper recycling home) the final outcome of commercial recycling, when undertaken with a credible provider, is going to be higher than domestic recycling. 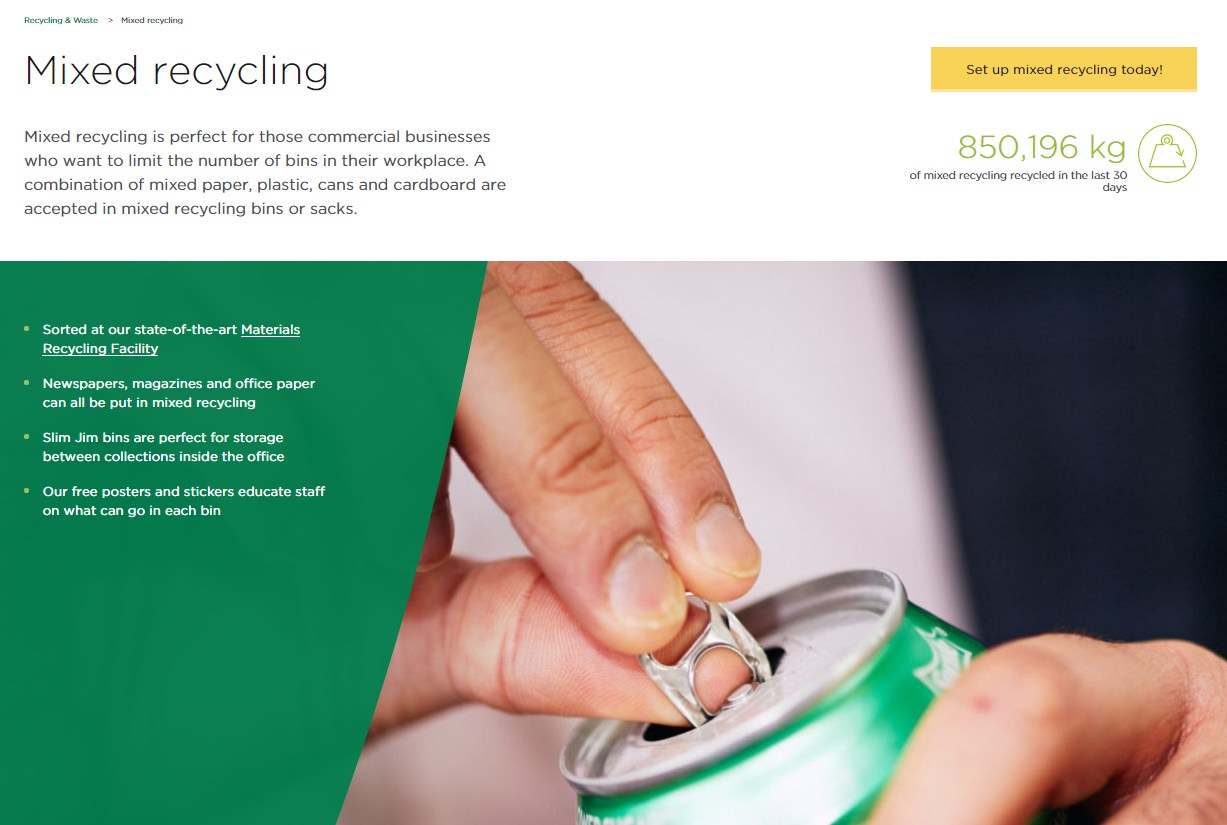 Paper Round has far more detailed explanations as to how their MRF works, click here to learn more.

The sorting happens through a kind of marble shoot for trash, wherein a large bouncing conveyor belt called a “ballistic separator” separates out three dimensional waste from two dimensional waste, and then the streams of waste are further sorted by weight and type along a snaking machinery that uses fans, optical lenses, and conveyor belts to shove and sort the recyclates by type. For this reason, shredded paper can’t be recycled at a MRF! It slips right through the cracks of the machinery and down to the floor where it is swept up and lost to landfill. We also noticed that people are working along the conveyor belt lines at multiple phases of the waste material’s journey. For this reason, glass shouldn’t be included in mixed recycled waste bins since it can cut the workers and it also can break the machinery. Shredded paper needs to be bagged and placed in a “paper only” recycle bin, and glass should also be recycled on its own.

Gemma Haycock, Paper Round’s Sustainability Executive, told us that much of the work at the MRF has to do with sorting through people’s recycling mistakes, or dealing with “contamination”. The plant is designed to capture up to 98% of all recyclates from its waste stream, and she reported that it often hits 97-98%. Still, contaminated recycling waste streams are the single largest hindrance to the MRF’s performance. So what causes contamination? Here’s what we now know:

Among E Co. staff, we do have some wish-cyclers (even among the authors of this blog post!) and thus we sought clarity as to what exactly can be recycled and what cannot.

Takeaway: Be conservative with what goes into the mixed waste recycle bin. 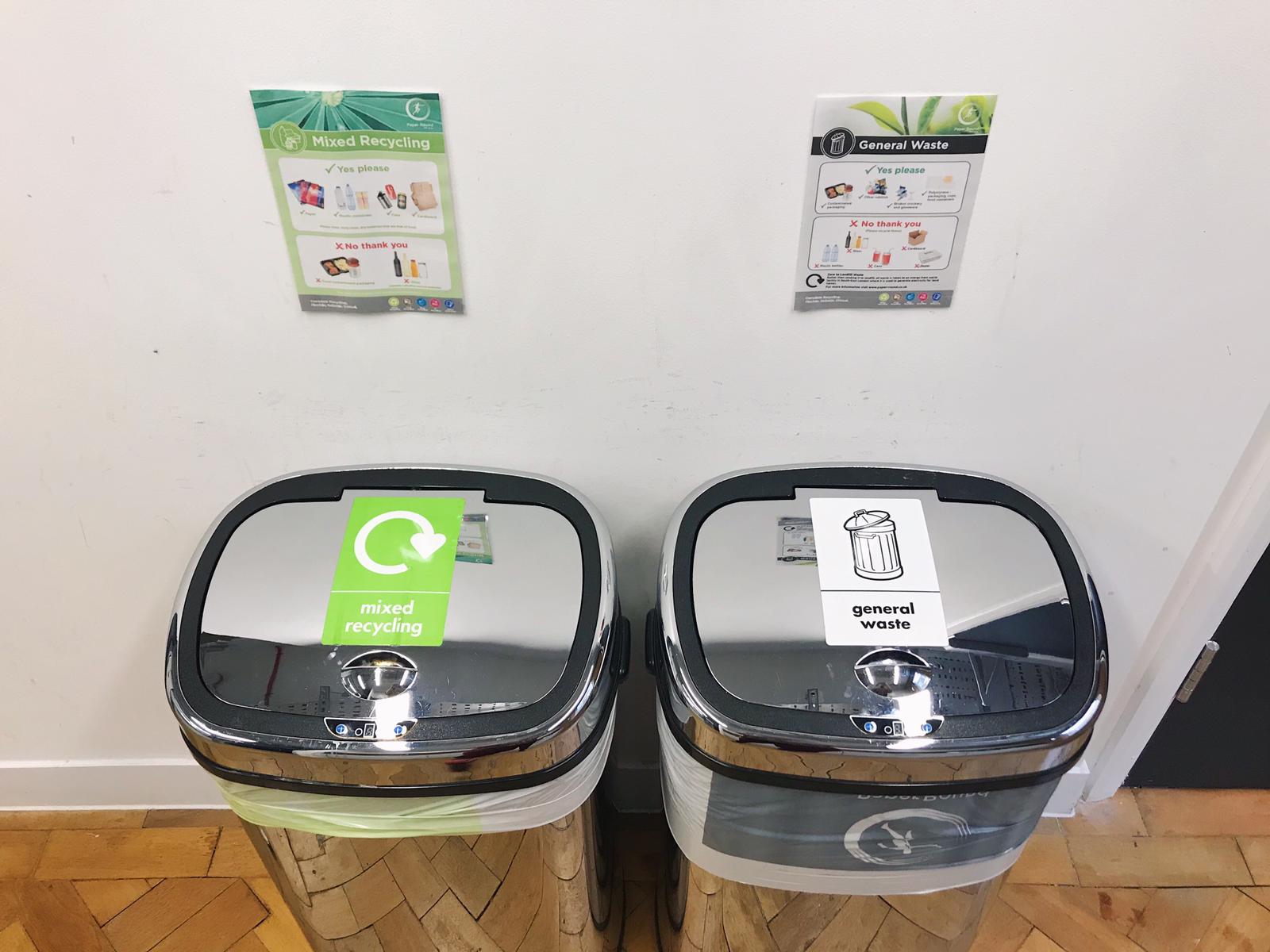 As already mentioned, even though glass and shredded paper are recyclates in name, they have no place in a general “mixed recycling waste” bin. They need their own separate bin. As an aside, we learned that Paper Round discounts the cost of segregated waste removal, compared with mixed waste.

Disappointingly, veggieware has to go to a special facility, and there is just one of them in the United Kingdom. Veggieware cannot be composted with pure organic waste, even though it is often labelled as “compostable.” It might break down faster than plastic, but it’s no panacea. At E Co. our catered events are always plastic free, and we avoid veggie ware too. Single use anything – plastic or plant-based plastic – is never going to be a sustainable pathway forward.

Liquid, food, and grease on a recyclate not only compromise the recyclability of that piece of waste, but can also contaminate an entire bin. For example, we learned that the highest value recyclate is hard card and paper cup material, so utilising coffee cup recycling bins is really useful. But if that cup has coffee left within it, the coffee will devalue the entire bin of card-value paper!

Jasmine asked about pizza boxes (trying to resolve a marital dispute) and received a very diplomatic answer, “A pizza box with a few little grease marks is actually okay to recycle, but if it is really greasy, send it to the bin.”

Takeaway: Recyclates should be dry and relatively clean. If its greasy, it’s lost to the landfill.

In a separate and much smaller room, where we had to put away our phones and enter a double locked door, we learned about Paper Round’s approach to confidential documents and electronic files. Both types of classified material are shredded into bits, and then disposed of in the most sustainable way, which Paper Round explained is their overall obligation and mandate. As we stood in that room of huge paper piles, Gemma told us that there are fires every few weeks due to a battery getting caught in the shredder! Reader, I had a low grade panic attack (JH).

Takeway: Separate your batteries from the trash. Come on, you knew that.

Our last stop was to an overwhelming room full of electric waste, with rows and rows of monitors (including a warehouse shelf of apple large screen monitors), lap tops, piles of wires and connector cables and phones. Sadie remarked that she felt sick and claustrophobic by all this incoming e-waste. We learned that Paper Round erases all data and tests their functionality – electronics that can be recovered are refurbished. E Co. is currently looking into buying monitors and cables from Paper Round, and Jasmine’s next apple monitor is coming from the dump.

Takeaway: When possible, buy refurbished electronics. In the words of Ed Begley Jr, “If you’re not buying recycled products, you’re not really recycling.” 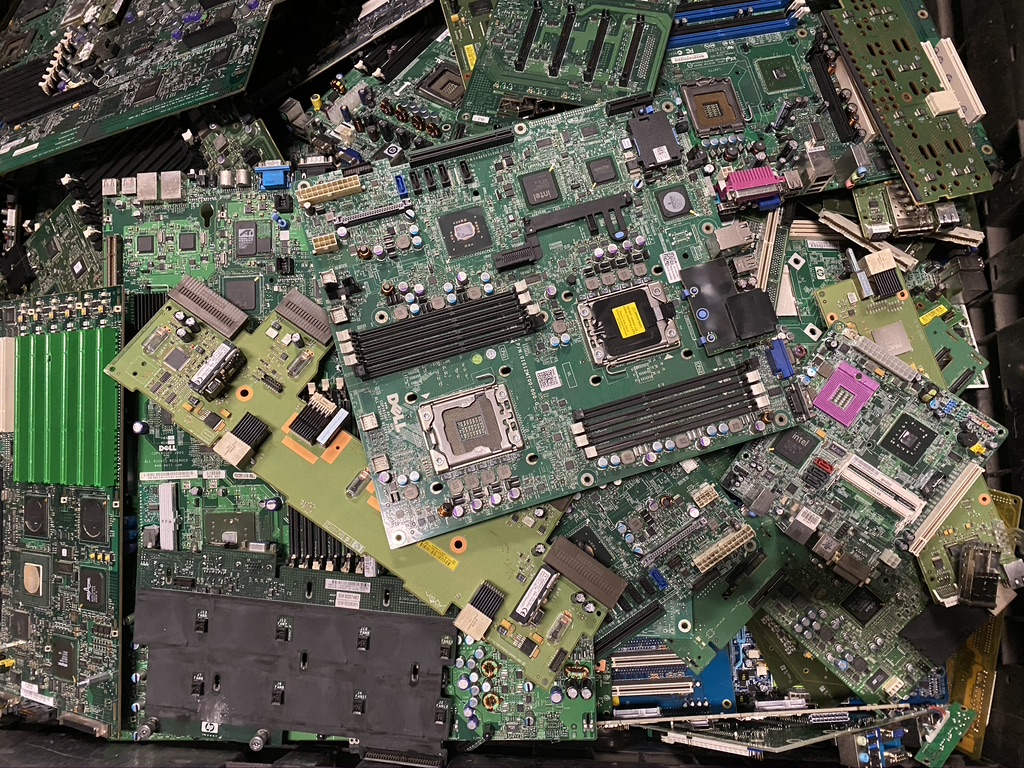 At a certain point in the tour, we asked about the highest value recyclate. We learned that the answer will fluctuate according to market demand and location, which makes sense. Still, in general, we wanted to know: which recyclates go into a glut? which are actually used?  Surprisingly, plastic is currently highly valued, particularly PET 1 plastic (water bottles) so long as they are clean and dry and therefore able to be segregated. This doesn’t mean that plastic bottles are a good alternative to your stainless steel thermos, of course! The second highest value recyclate is card stock, including clean coffee cups.

Takeaway: Rinse and dry coffee cups and drink bottles before recycling them, so that they can be the high value recyclate that they want to be.

What next for ‘GOAL 2.1: Reduce, reuse, repurpose and recycle our office – and home office – related waste’

Based on what we saw, how do we now ensure we are recycling effectively in the office?

E Co. is fortunate to have an environmentally ambitious corporate landlord, and TBW has accepted E Co’s offer of pro-bono support to help strengthen waste reduction throughout the building (and hopefully, with an impact on the other 485 buildings that they manage). The immediate next step is to improve recycling signage throughout the building, and to provide trainings for the maintenance staff to ensure that separated recycling makes it to the Paper Round dumpster bin. Medium-term goals include introducing more segregated waste bins (which Paper Round provides at a cheaper subscription rate than mixed recycling bins, given their increased ease of processing) and also introducing e-waste bins into the office. Long-term goals include composting facilities and training material development for use by other buildings.

Moving forward, our company commitment to reducing our business operations footprint continues at pace. Our recent B Corp certification has connected us with other businesses recognised for positive contributions to customers, community, and environment and it has been motivating to see what fellow businesses are doing for their own environmental commitments. It’s now up to us to keep the momentum going for lasting change existing business practices. Click here to read our environmental policy in full, which includes reducing non-essential high-carbon travel and reducing our meat consumption.

If you have ideas to share or are interested in doing more to reduce your company’s footprint, drop us a line at amy@ecoltdgroup.com and we can discuss how we can accelerate progress together.

Have you read our environmental policy? Take a look at the other green principles we’re following to improve the sustainability of our operations, from reducing emissions to conducting voluntary service.